Showing posts from 2008
Show all

- December 09, 2008
Dames and dudes: I updated my HardWearables site with a bunch of new photos. They aren't great photos, but they'll do for now. Take a look, think about your loved ones, and then about the fact that you haven't gotten any shopping done yet. If you get an inkling to get your hands on my hardware, email me. I can hook you up with a day or two lead time; esp. if you live in Seattle.
Post a Comment
Read more

- September 17, 2008
So I wanna get some more tattoos. I've held off for years since my first/last ones (back in college) ... not because I didn't catch the bug ('cause oh I did), but because of my CAREER. Well, fuck! Fuck THAT. I figure, what the hell? I'm not acting, I still want the tattoos... done deal. I can regret it later. That reminds me of an old BFL joke: Leaping off cliff in the throes of carpe-diem-ness: "No regrets! NO REGRETS!!" Realizing 2 seconds later that you just leapt off a fucking cliff: "Regrets! Oh, regrets!" Anyhoo ... tattoo. Where? What? Advice welcome. I have some ideas, but what I really want is someone really cool and intuitive and talented to interview me and then design me something. Does that happen? Do people do that without you having to be a millionaire? Many things I'd have once considered tattooing have been ruined by others. Things that inspire/intrigue me but that have been co-opted by or are so closely associ
8 comments
Read more

- September 12, 2008
I have not agreed with McCain much of the time since I started paying attention to him (in his failed bid for the White House), but he was someone that I learned to respect greatly. "There's a thinking man," I said to myself. "Goshdarnit, we may not agree, but he has integrity. He actually thinks . I think we'd be okay if he were elected." Oh, if wishes were horses ... The current John McCain is a shell of the previous John McCain, and I am sad when I see him speak now. As I watched his acceptance speech at the RNC, I wanted SO BAD to see the McCain I'd come to admire. As much as I want this whole right-wing fiasco of a goverment to collapse under the weight of its own lies, I wished with all I had that the real John McCain, the one hiding deep down inside, would burst through and show what he used to made of. I may have cried. At least I felt like it. I want Obama to win so badly it's stupid to even talk about, but I still want the aliens to retur
3 comments
Read more

the first monday of the rest of my life

- February 11, 2008
It is only appropriate that I celebrated the eve of my fulltimeness by staying out WAY too late and drinking a WEE BIT too much. I had a low-grade hangover all morning. Hey, look at me! I'm an adult!
2 comments
Read more

turn and face the stranger

- February 10, 2008
I was featured in an essay that Mike Daisey wrote for The Stranger this past week. If you read this blog or know me pretty well, it's easy to identify the friend of the story as me. Setting aside the main thrust of the essay for a minute and focusing on ME because this is MY BLOG ... It was interesting to read my situation as a story. Mike sent it to me before it went to print, and I giggled when I read it. Because I seem so tragically romantic, which is not how I feel inside. But what he writes does not ring false, and I endorsed it fully. Because it is sad, isn't it? I live my life - it is impossible to view my own life as a narrative. I've come to peace with whatever this decision might mean for me and my future, or else I wouldn't've been able to make the decision in the first place. But as a narrative, it's kinda fucking depressing, for real. If it wasn't me - if I didn't know the person Mike was talking about - I would've felt a ta
4 comments
Read more

here's a fucking health tip for you ...

turn and face the strange

- January 16, 2008
LOTSA CHANGES! (You get a super special secret kiss if you can name or describe that BFL show and/or sketch.) Oh, by the by ... I've given up theatre again. You can see my past reflections on this subject (in chrono order): here (in which I break up with acting) , here (in which acting & I patch things up) , and here (in which I continue to question my relationship with acting) . I haven't spilled much about my experience with The Women at ACT Theatre. As long as I live, I will think of that production as a gift. An incredibly unique, wonderful and truly special experience. I really have nothing bad to say about it. I loved every minute. And yet, ironically, it was during the production that I realized that my previous semi-facetious disavowal of acting was perhaps actually my prescient subconsciousness prepping me for future action. During the show's process, I looked at the actors around me (in and out of the show). They mainly fall into 3 categories. T
5 comments
Read more

H to the O

- January 08, 2008
For the first time in weeks, today I drank as much water as I should. In related news, I also peed like 100 times, but who cares? I know from experience that it regulates as soon as my body's flushed some of its toxins. I'm also trying to cut back on my diet cola consumption. At one point, I'd quit it altogether, but then I quit quitting. Now I'm going to quit quit quitting. I'll have to find new ways to get my caffeine. Maybe I'll just start taking speed. I'm joking. DON'T DO DRUGS. I am finding that it's not the lack of desire to workout that keeps me from it; nor is it the lack of time anymore now that the holidays are over. It's simply that sometimes I get distracted and I forget. Yesterday, for instance - I wanted to workout, but I also wanted to get this project done. * I planned to work on the first half of the project, take a break & workout, and then finish up the project. Well, I forgot to workout. So thoroughly, in f
Post a Comment
Read more

this is all i did today

- January 07, 2008
I am glorying in newfound web vanity . In other news, although I never quite recovered from STAYING UP UNTIL FOUR IN THE MORNING, I had nary a sign of hangover. Which is either a true miracle or a freak oversight of nature that I'm sure I will pay for imminently. In the meantime - HEY! you guys that own whoever makes Emergence-C ... I have no right to feel as good as I do, and I thank you.
3 comments
Read more

- January 03, 2008
I'm kidding. Kind of. Seriously, though - that shit is HARD. TODAY: 45 minutes of beginner's yoga Prior to: Felt rushed; was worried about how much time I had (or rather didn't have) before I had to leave for the 14/48 meeting. During: Felt good - the stretches in particular. The woman on the DVD I have does an excellent job of getting me to visualize various muscle activations & grounding, and also describing how it might feel. This helps me a lot, since I don't have a personal coach in the room to monitor me. After: Glad I fit it in; I really needed the stretching. Yoga's a bit sneaky -- at the time, I felt like maybe I should have done more, but now (a few hours later), my body feels even the little that I did. Tomorrow, I have the same time crunch issue with work & 14/48. I will try to make it home in between the two and bike for at least 1/2-hr. (stationary bike).
Post a Comment
Read more

get on your bikes and ride 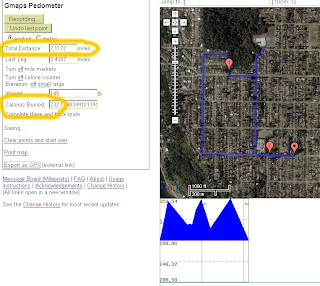 So. Turns out that fitness is still one of the first things out the window when I get busy. Not a surprise to me, truly. At least it wasn't the very first thing I threw out the window. And I kept my weight steady throughout the holiday season, even though my habits slipped. I can only guess that some of my base level habits have changed for the better, and I'm actually getting more activity & eating better all around, even though it hasn't been at the forefront of my mind. 2008 is a brand new year full of promise, and I intend to participate in an August triathlon in Seattle. 1/2-mile swim, 12-mile bike, 3-mile run (or thereabouts, depending on the final route). I was persuaded (quite easily) to do it by a friend who was going to do it again only if she could round up some other gals to commit. So I'm in, as well as some other lady friends of ours (it's a female-only event). The most exciting development is that my mom's going to fly out to do it wit
1 comment
Read more
More posts