where the streets have no name

110 miles. The air was wonderfully cool last night, and woke up refreshed and not sweating for the first time in a handful of days. We even slept in just a bit. Nice. And we took our time getting ready, so by the time we headed out, it was lunch. Hooray! We enjoyed a delicious lunch buffet at the Game Lodge, the former “Summer White House” of Coolidge. Then we hit the scenic road.

We’d gotten a tip from the rangers, and in mere moments we rounded a curve, and were surrounded by hundreds and hundreds of bison. It was truly amazing, and I shouldn’t even try to capture it here, because no words exist for the childlike, giddy, quiet, intense, joyful wonder I felt. (Okay, actually – I just came up with six words; but you know what I mean.) And the herds just kept going and going for, like, 2 miles. Astonishing to see these beautiful beasts up close. If I were allowed, I could have petted them from the car. It was slow-going, because they were everywhere, all over the road, and munching on grass and brushing their teeth. I was in heaven! We emerged from the bison herds, but the critters weren’t done with us yet. These magical animal encounters just kept up the whole day. Mule deer moms & babes. Antelope buddies out for an afternoon walkabout. White tail deer that couldn’t care less whether we were there or not. A whole extended family of big horn sheep nestled down in a copse of trees. We had to stop for an entire wild turkey family out for a stroll to cross the road right in front of us.

And then there were the burros, famous in the area (or infamous, I guess). A small group of burros had been brought to the area in the early 1900s by a tour company to carry folks to the top of some mountain lookout or other. Eventually the company closed up shop, but just left the burros there. So they’ve been in the park for about 100 years, hanging out, breeding, making families, having fun, and living pretty good lives, really. And whenever they see people, they come right up and nose their way right into your beeswax. I don’t know if it’s in a burro’s nature to be forward with humans, or if it’s a learned response, or what; but these suckers’ll stick their heads right into your car window - right into your face! - and beg for food. If you get out of the car, watch out! Because they’ll surround you with their cute begging eyes and their huge nosy noses. I LOVED IT! I was out of the car instantly, digging around for food that Shoogs and I weren’t going to eat. We served up some lettuce that had gone wilty, we sacrificed our carrots, we gave ‘em everything we didn’t suppose was unhealthy for them. And a dozen or two of them rewarded us with undivided attention ... until we ran out of food, and fresh tourists came along. It was pretty cool, but also the teeniest bit scary to be mobbed by creatures who outweigh you by that much. I got all girly and giggly when they would eat out of my hand.

We headed back to camp to indulge in a divine nap. It felt so decadent and good and pleasantly temperatured. Maybe the best nap of my life.

In the early evening, we took a gorgeous drive through the park highway up to a few viewpoints of Mt. Rushmore. And there are two short tunnels we go through that were purposefully designed by this one dude back in the 30s to allow a perfectly framed view of Rushmore. We’d thought we might catch it at sunset, but we mistimed it. No big deal, it was a great view, and stunning drive through a stunning park. It unfortunately came along with the WORST public restroom of the entire trip. I am not timid not overly sensitive to the vagaries of public facilities, but even I almost couldn’t stomach it. I tried twice, and both times decided my needs were just not that urgent. Then I came to terms with the fact that yes, in fact my needs might very well be that urgent, and I guess third times’ a charm. For the record, I am compelled to note that these bathrooms were outside the boundaries of Custer State Park, and they bear no responsibility for them. Thanks for listening.

And that’s as close as we came to Rushmore, a great view from a long distance. Shoogs had been there before. I hadn’t, but felt no compelling need to go. What more could I have seen from up close?

That night was a full moon, huge and low in the sky, and a heartbreaking shade of light orange. 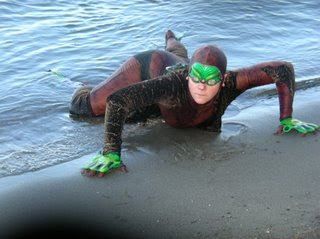